Data Center Before and After Shots from Mt San Rafael Hospital

I was really impressed recently by a couple pictures my friend, Michael Archuleta, CIO at Mt San Rafael Hospital shared with me. Michael shared these pictures along with the news that his hospital had achieved HIMSS Analytics Stage 6, Meaningful Use Stage 3, and received the 2019 Most Wired Hospital award that is now being given by CHIME. What makes these achievements even bigger is the fact that Mt San Rafael Hospital isn’t a large hospital in a bustling urban center. No, Michael Archuleta and his team are achieving these results in the massive town of Trinidad, Colorado (Population is less than 10k per wikipedia).

Seeing success like this makes me wonder: What’s your excuse?

No doubt Michael and his team could have made plenty of excuses for why they couldn’t be high achievers. Instead, it seems like Michael Archuleta has realized the value of these awards isn’t really about the award itself. Instead, it’s a unifying goal for his team that everyone can rally around and work towards. That’s a powerful thing for a health IT organization. We all know the hospital IT organizations that feel haphazard and without direction. Working towards one of these awards can offer a unified direction.

As a former data center geek myself, I was even more interested in the before and after pictures that Michael Archuleta shared from his server room. Take a look at their IT environment before embarking on these IT improvements: 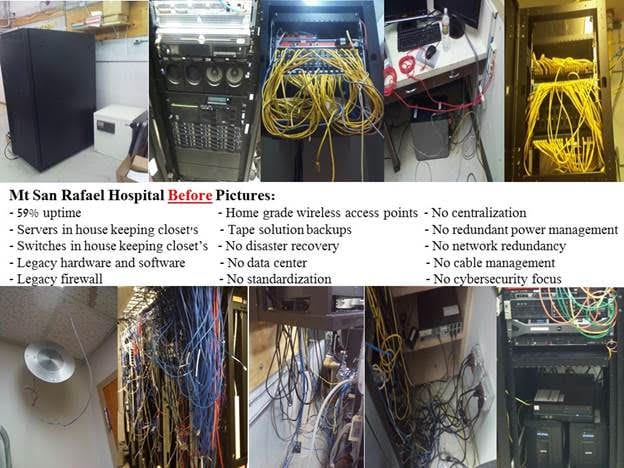 If you’ve worked in a data center, you know how much fun those rat nests of network cables can be. You’re just praying that something doesn’t go wrong since troubleshooting it is terrible.

A big part of their IT effort was adding virtualization technology which Michael tells me reduced costs by 56% and improved uptime from 59% (ouch!) to 99%. Here’s a look at the after pictures and results: 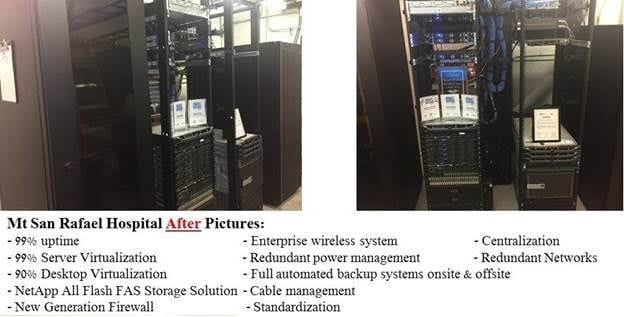 Congrats to Michael and his team at Mt San Rafael Hospital and thanks for sharing these images. Hopefully it will inspire others regardless of the challenging situations they find themselves in.

This article originally appeared in Healthcare IT Today.

John Lynn is the Founder of the HealthcareScene.com, a network of leading Healthcare IT resources. The flagship blog, Healthcare IT Today, contains over 13,000 articles with over half of the articles written by John. These EMR and Healthcare IT related articles have been viewed over 20 million times.